What have you leaned about the civil war from ageod's civil war series?

What have you leaned about the civil war from ageod's civil war series?

When I first started playing, I thought the Civil War was interesting and the game seemed to be a nice strategy game with a different angle. I've since read a ton and now consider myself a bit of a buff of the era, so I've learned a lot of things during the time that I've been playing the game. But I've learned a few things from the game specifically, some true and some false, and I was wondering what the game teaches that I've missed. Another way of thinking of this list is here are some big picture facts that are true in the game and in real life. Many of you will have known this before playing the game, of course.

First, I learned the names of a lot of generals and have a rough idea of who was considered good and bad and of when they were promoted. Some of these things I've learned might not be true, particularly the timings of promotions.

I've learned a bit about the relative contributions of states to the war - particularly the enormous numbers of regiments from NY, PA, OH, and IN (I don't play CSA often enough to have a feel for it on that side).

I've learned that marching an army through heavy mud is a terrible idea, even though walking through mud as an individual can be manageable.

I've learned that having the regular army in the far west meant that the Union had a hard time securing federal property, from West Texas to Harpers Ferry and Gosport, all of which quickly fell into Confederate hands.

I learned that Norfolk was the key to the Confederacy's navy in the east, mostly because of the Merrimack.

I learned that blockade running was easy but not that valuable to the Confederacy overall. The Confederacy's cotton also didn't provide a large windfall to their war economy.

I think the biggest thing I learned and the reason the game is good is that the war was very influenced by geographies: the Missouri and Shenandoah Valleys, the vastness of Indian Territory, Texas, New Mexico and Arizona, the mountains of eastern Kentucky and Tennessee, the swamps on the coasts, possible and impossible paths of invasion and retreat, etc. In the game, there are very few impassable regions in good weather, but there are tradeoffs, bad weather, supply, and cohesion considerations in movement which make for a very cool feel to the game.


There are a number of things the game abstracts very heavily or even misses on, particularly the variety of artillery and navy, how cavalry can and can't be used, water crossing, naval landings, internal and external politics, slavery, the role of state militias, etc. Some of these could be fixed in mods, some could be fixed by the devs, and some are impossible.
Across the South, we have a deep appreciation of history -- we haven’t always had a deep appreciation of each other’s history. - Reverend Clementa Pinckney

I have learned that women in nightclubs don't care about the Civil War.
[color="#AFEEEE"]"Liberty and Union, now and forever, one and inseparable!"[/color]
-Daniel Webster

RULES
(A) When in doubt, agree with Ace.
(B) Pull my reins up sharply when needed, for I am a spirited thoroughbred and forget to turn at the post sometimes.

I learned how complicated it is to organize a large army and march (rail, etc) it anywhere while keeping the troops coordinated and healthy enough to fight.

I learned how a sudden change in the weather can foil my brilliant operational deployment (I hear you, Gen. Burnside).

I learned, as the CSA, that you can't always get what you want.

I learned that the war happened west of the Mississippi. Not entirely true but it drove me to read a few books on the subject. I learned about stand watie for one and confederate Indians, that in itself was mind opening.

I learned their was many ironclads, I honestly only knew of the battle in Virginia with the first two.


I learned some of the diplomatic stuff that went on. Few others just cant think of them off the top of my head at the moment.
"How do you like this are coming back into the union"
Confederate solider to Pennsylvanian citizen before Gettysburg

"No way sherman will go to hell, he would outflank the devil and get past havens guard"
Southern solider about northern General Sherman

"Angels went to receive his body from his grave but he was not there, they left very disappointed but upon return to haven, found he had outflanked them and was already there".
Northern newspaper about the death of Stonewall Jackson

Interesting and appropriate thread. I view games from the opposite side, what has the game learned from history? So I am always sceptical about whether or not the designers got the war right and I am critical of design flaws. This is a pretty impressive game with regard to teaching, and thus learning, history. While I always enjoy the designers 'take' on leader qualities, I will always have quibbles with some decisions. McClellan is always the most difficult to rate and Rosecrans next most challenging. In game terms their positive qualities are hard to quantify.
One challenge tripax raises in the initial post is that of the cotton embargo. This would be an interesting place to tweak the game. What might have happened had the South sold all of the 1861 crop?
Anyway, I will be watching to see what others have learned.

Even though some of these things indirectly informed me about things, it did cause me to do research. Especially about the Far Western Theatre.

- I learned that the far west was a lot more important than most people think.

- I also learned that at first, Samuel Cooper was actually the highest ranking general, and very little people surprisingly don't know that.

- I also learned about the Union conterfeiter (Samuel Upham) that was pumping money into the CSA to cause inflation.

- In Southern California, the population was very pro - secession due to the number of mexicans who despised the federal government, and the amount of southerners. They couldn't secede however, because the meetings and demonstrations to consolidate the secessionists were broken up in places such as Los Angeles, since the Union regular army had a strong presence there.

- During the New Mexico campaign, though Sibley was known to be a strong alcoholic, he had some great officers, such William Scurry. Not to mention, his mounted Texans were known to be elite and rag tag in the field of battle. However, this would not matter because his campaign had to rely solely on logistics, because his supplies were very limited. During the battle of Glorietta Pass, Scurry and his Texans were pushing the yankees back in an offensive, taking the field and putting Fort Union in doom. However, despite the odds waying heavily against the Union, the battle was automatically lost when a Union flanking force accidentily stumbled upon the remaining Sibley's supplies, and burnt them.

- I also learned that the Far West is easy to conquer as the CSA, since places north of NM and South CA were evenly split. In South Park, CO, I found there to be pro-secession. 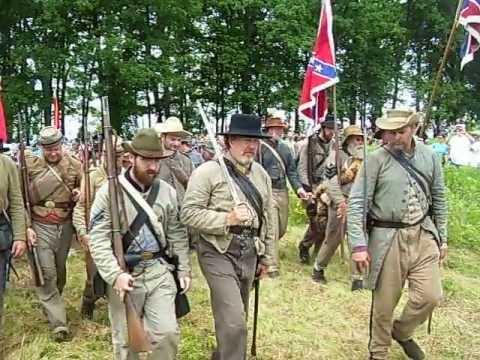 khbynum wrote:I learned, as the CSA, that you can't always get what you want.

It has brought back memories of when I first played Europa Universalis .. I would come across an event I knew nothing or very little about and it would immediately result in closing the game down and send me off for hours reading about it.

1. The war in the Far West
- How few troops were involved - just over 1000 men per side were at the decisive battle of Glorietta Pass (USA 1300, CSA 1100)
- How the California Column managed to pull off it's march

2. How impressive it was that the Union managed to secure Kentucky, The Upper Mississippi and Tennessee in 62
- Ft Donaldson and Shiloh really were decisive battles that forced the CSA to basically give up Nashville and Memphis and the critical Tennessee resources

4. How the CSA had to introduce conscription in early 62 because the 6 month troops were not reenlisting

5. How GraniteStater has been talking to the wrong sort of women in nightclubs

Oh no, they're just fine...just not very bellicose. Which is OK, I hate having to defend myself in the midst of 'other activities'.

Nonetheless, the search for Scarlett goes on...
[color="#AFEEEE"]"Liberty and Union, now and forever, one and inseparable!"[/color]

-General Joseph Wheeler, US Army, serving at Santiago in 1898

(A) When in doubt, agree with Ace.

(B) Pull my reins up sharply when needed, for I am a spirited thoroughbred and forget to turn at the post sometimes.

Forget Scarlett; she's nothing but trouble. Go find a Melanie.
Like arrows in the hand of a warrior are the children of one's youth.

I discovered this traditional american music I wasn't aware of. I knew of the 70's folk revival or the rich Québec music, but not this immense XIXth century US (and CS) repertoire. Both Simple and sophisticated, profane and spiritual, light songs heavily charged with sentiments...
I fell in love, bought every 2nd SCSB disc, read about, learned to play a few. I am now ready to animate any firecamp if needed ! Too bad my outrageous french accent is far from Southern Mississippi...

In many ways, this music made me rethink my opinion on military music, and how it could help people to survive the war they fought. In a next step, I could eventually listen without nausea to French military marches, and discover another part of history I didn't knew.

For serious things about ACW, I got them in books, and Ageod strongly helped of course my curiosty to increase !
TYW Baroque music mod

Bruit Bleu wrote:
In a next step, I could eventually listen without nausea to French military marches, and discover another part of history I didn't knew.

I'm always astonished with what the Marsouins did to Marcel's Opium. The original composition was wonderful, but what was done to it was atrocious.

got turned into this

is one of the great aesthetic mysteries of the twentieth century.
Post Reply
12 posts • Page 1 of 1

Users browsing this forum: No registered users and 14 guests