I'm new with AJE, and as I played only few hours I think is a great game, expecially because of its historical detail.

BUT I want to point out that the historical accuracy is very poor in the geography of Cisalpine Gaul: north of Padus river the regions are shifted to east: so between the ticinus and adda rivers, were we expect Mediolanum, there is Novaria, that should be west of ticinus. Mediolanum is between adda and olius river, were we expect Bergomum; Vercellae is south of Padus, but in the real world is set north of that river, the same for Patavium and the atesis river, and so on...

For myself I had modified the map in a more historical way, without affecting the game mechanics... (I hope)
The scenario also should be modified to obtain large settlements, like Mediolanum, correctly placed in map.

I've removed Cestia, Tarvisum and Novaria because are lesser settlement. Dertona is on the crossroad of via Postumia and Aemila Scauri, and fill, a bit too southern, the gap where was wrong Vercellae. Oscela is north of Vercellae and Novaria, but west of ticinus there's no more place (I have also removed Novaria for no place, very sad because I live near there, but Vercellae was Historical preminent). North of Medilanum we have placed Comum (that was also more preminent than Oscela). Tarvisum was a small Center, and is also in the historical place of Patavium. The gap in the Padus marshes is filled by Hatria, an important ancient marketplace (yes, it was at his top in pre-roman period, but there's no more possibility in that region, and in roman era was already inhabited). Brixia was a preminent settlement i Roman era, and I put them instead of Mantua (I hope Vergilius can forgive me...). Verona too is in a wrong region, and I used Vicetia for fill the gap after the movement.
All of this are suggestions and I think the map can be modified a lot more, but can also be not modified...
I think also that all this boring discussion can be appreciated only by fanatics, historians and archaeologists like me...
In any case the game remain a very good one!

You're right, but not only in Cisalpina there are mistakes. For example Locri in the game is in a wrong position, because it is near the mountains, instead it should be on the coast.
Italian videogamer (I love strategy games)

I think that a game with such an historical focus should take geography more seriously. Not in a maniacal way, of course, but also not with inaccuracy...

Don't forget that this map must be open to many times, from 300BC to 400AD. So we must make choices with some tactical towns during such scenarios.
Just think for example where can you place the bruttian domain, in south of Italia, when you must create many greek places too ? After that little example, you can easily imagine we must make such choices for the gameplay too !

At least chabge some city names, for example Locri, and instead put for example Hipponion or Valentia (or Caulonia)
Italian videogamer (I love strategy games)

Yes, it could be done... but the team is very very small... sometimes, we forgot some details

Ask to me for all the ancient city names of Italy, I'm always available

Same as for the unit pictures changes: make a ONE big document listing all the changes and send it to the team

El Nino wrote:Don't forget that this map must be open to many times, from 300BC to 400AD. So we must make choices with some tactical towns during such scenarios.
Just think for example where can you place the bruttian domain, in south of Italia, when you must create many greek places too ? After that little example, you can easily imagine we must make such choices for the gameplay too !

I know it's difficult to conciliate all the games purposes, the mechanics and the different time scenarios, what I think can be avoided is putting i.e. Mediolanum between Adda and Olius river when historically is set between Ticinum and Adda, and there is already a region in the right position, with a name (Novaria) wrong, and not needfull for any historical reconstruction period (I don't still have Birth of Rome, but I don't think the tribe of Vertacomori or Vertacomacori, historical settled near Novaria is a faction in these game).

El Nino wrote:Yes, it could be done... but the team is very very small... sometimes, we forgot some details

If you are pleased to have a little help for modify such historical/geographical matters I can give you some information...
Maybe we can prosecute to dicuss some possibility of changes with everyone have some knowledge about ancient geography, like Vincentius for example, and any other... and with anyone that can give information about what is possible and what is uncomfortable with the game mechanics and scenario needs...

I can post a list of regional names I think can be changed with some more historical, but I don't have a good knowledge of ancient geography for all the map (I know the italian peninsula better than other regions of empire): I can read up about, but is better if there's someone with knowledge of specific regions that can insert other issues...
After discussion, when we have an agreed list of desired changes, we can send it officially to the team...

The problem is that in some cases we can't change the name of a city that is in wrong position because that city, for example Lilybaeum, is a very important one.
Italian videogamer (I love strategy games)

This is a proposal for change some city names in Northern Italy...

Vincentius wrote:The problem is that in some cases we can't change the name of a city that is in wrong position because that city, for example Lilybaeum, is a very important one.

I think that the shifting of Lilybaum is not so relevant, is between Drepanum and Agrigentum like in the real world, only the position of the city is shifted a little south-east, but the regional connection are substantially correct...
My aim is to try to correct relevant errors, more of the region positioning than precise city location, i.e. mediolanum between the wrong river, vercellae in a totally wrong position and with consequently a wrong connection with neighboring regions... Also Bononia is in a wrong position (shifted to east) but have a right relation with the neighboring Mutina and Ariminum, so is at least accurate for a game.

Now I use this site http://imperium.ahlfeldt.se/ for positions of settlement I don't know so much, can be a very good help for ours purpose...

Actually you are right, it would be too difficult chaning the positions of the cities displayed on the map.
Italian videogamer (I love strategy games)

Ok, changhing cities and positioning it's a problem. The solution can be changing only the river name on the texture, eliminating lakes (if moving them would be a problem). Only 4 or 5 textures to modify to resolve the matter, without changing anything scripted and so on...

(I'm here again because I restarted to play AJE, I like it... but these errors makes my heart bleeding...)

Maybe we should look at it with the Geographical lack of knowledge of the time. The earth wasn't mapped with the precision of modern day.

Just my 2 cents worth

But mediolanum is between river ticinum and adda now as it was in roman era. On the game mediolanum is between river adda and olius. And between river ticinum and Adda in the game we have novaria, that in real world is west of ticinum not east.
The problem is related on the river names. Changing or removing the names is the simplest solution. And also removing the lakes, that are in good position related to river but shifted related to region names.
The relative position of regions is correct, and also the relative positions of river and lakes. What is wrong is the superimposition of these features. The overlapping is shifted...
Changing the region names is a big trouble, I know, but changing the map graphic is more simple and apply to all campaign...
My suggestion is to eliminate the lakes, and the names of north affluent of padus, mantaining the position of these rivers and the position of regions.

Unfortunately changing the map graphics is extremely hard and not at all practical to do...

Changing the map graphic is very simple, but it's a pretty long work if you want a good result, bacause you have to modify both normal and winter texture.
There's a modification I've made in about 1 hour, to show my statement about eliminating river names and lakes.
It's a pretty raw result, but it's only to traduce in graphic what I've said. 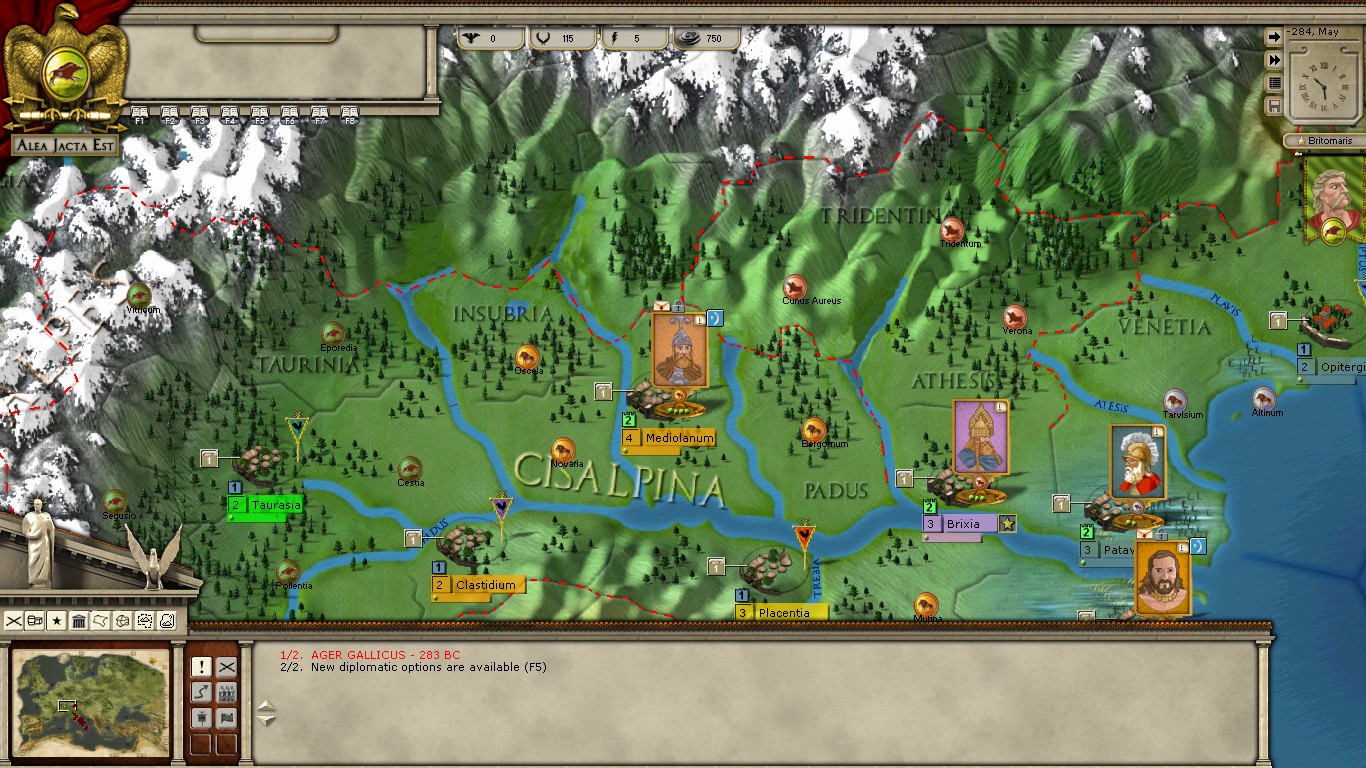 The original game graphic is this: 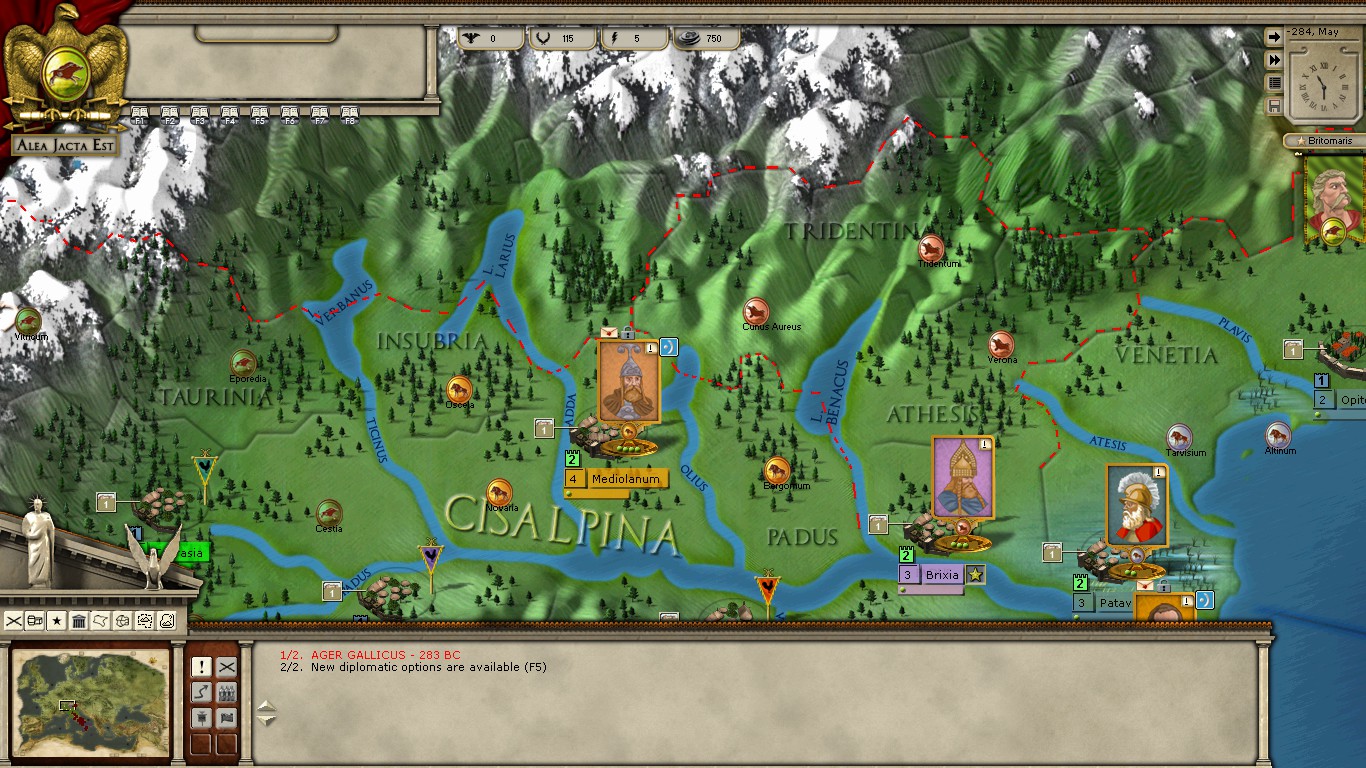 Mediolanum in the real world is betwwen river ticinus and adda, bergomum between river adda and oleus and brixia between oleus and L. Benacus...
But if we remove the names of river and the lakes (with their peculiar shape) we resolve the problem, because all these cities are between two rivers also in the real world.
Post Reply
18 posts • Page 1 of 1

Users browsing this forum: No registered users and 4 guests